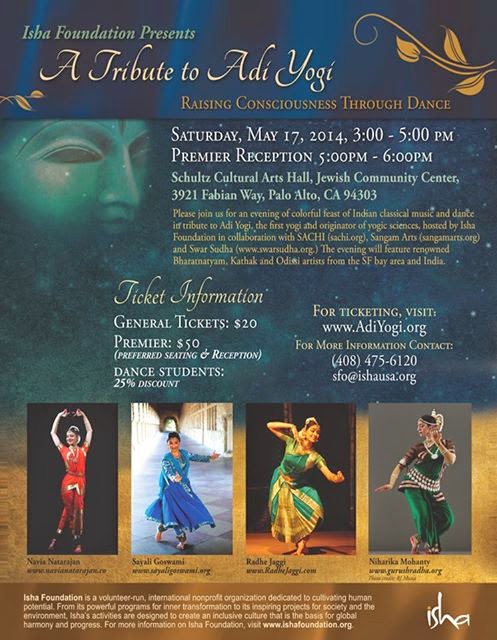 Posted by Sayali Goswami at 11:32 AM No comments:

Through Dance only I can connect with my True Self

“Being three dimensional, dance is perhaps the only art, which has the capacity to incorporate the essential elements of all the other sister arts and to become a complete, integrated and a unified experience.”
Learning classical dance is like learning a language. You not only hone yourself with the theoretical aspects but also have to master the equally important practical side. To truly master a language, you need to devote all your energies to it and make it an integral part of your life. The same goes for Indian classical dance. Some people think that learning for years is enough to say that: “I am a classical dancer”. But it takes more than just a handful of lessons to teach an art that dates back to hundreds of years.
Unlike other dances, Indian classical dance is governed by rules and regulations, which a practitioner abides by because they help him to understand and perform the art better. It’s this pre-existing structure which sets Indian classical dance apart from folk dance. The lexicon of Indian classical dance is rooted in sage Bharat’s Natyashastra, a historical text which dates back to 5,000 years, which has listed various guidelines when to perform.

But change, a constant feature in our life, is inevitable. Even the ancient performing art of dance cannot escape it. From costume and music to physical vocabulary, performers across generations have brought flourishes which have modified the existing repertoire. One can say that the social, the political and the economic factors of different periods have played an instrumental role in the kind of changes dance has seen. For instance, during the Mughal rule, a faction of kathak dancers did take their art to courts, and Bharatanatyam and Odissi saw their foundation in the temples, where women and girls performed these dances only for the Gods. During the British raj, dancing was banned in the temples with the Devdasi Prohibition Act of 1934. As a result, dancers had no alternative but to bring their art out in the open so that they could survive.

Even today, classical dance is considered a specialized art; it always catered to a niche audience, who were presumed to have an understanding of and eloquent taste in art forms. That’s why many dances received patronage from kings and rulers across country. The transition of dance from the private to the public domain has helped dance come a long way.

Change shouldn’t always be viewed with skepticism. The greatness of a dancer lies in his/her ability to add new elements in the existing vocabulary. You can’t just accept what’s given to you on the platter; you have to bring your ideas which help you to communicate better with the viewers who are constantly evolving. If you’re a good artist, you know that you have to adapt yourself to the changing times. While he may like to mould new compositions, he can do so only when he has aced the basics. Much like our life, which has border lines that guide us to become better individuals, even Indian classical dance has some which cannot be broken.

A wide range of changes in turn have widened the repertoire of dance and given audiences an opportunity to enjoy diverse styles. One of the biggest examples of change is the amount of choreographic work we see today. Initially, dancers performed the age-old compositions but today they are not afraid to take on different themes. This was not even considered 60 years ago, when all dance styles began to gain recognition as a separate entity. The contribution of dancers such as the Maharaj brothers , Rukmini Devi Arundale, Guru Kelucharan Mohapatra,Guru Balasaraswati, Smt. Yamini Krishnamurthy,Smt. Sitara Devi, Pt. Durgalal and Dr. Kanak Rele has been enormous in making these dances credible. They have striven to pursue dance in an era when it was considered unacceptable and rarely encouraged. Their efforts have single-handedly popularized the dances and made them respectable arts forms.

In our fascination with everything western, Indian classical dance is also a great way to stay grounded to our rich, variant culture. Simultaneously, since Indian classical dance is so rooted in tradition it helps you to respect your culture, enhances your spiritual growth, brings a whole new grace to your personality and enables you to express yourself better. That moment when I am on stage with the musicians, it gives me tremendous happiness. I am at peace when I dance.

However, many people believe that classical dances have an effeminate nature. I choose to disagree. Most of the legendary teachers have all been male including mine (Pt Durga Lal) and without them the dance would have never reached to the women. Guru Kelucharan Mohapatra gave Odissi a new spurt of life, Birju Maharaj and my Guru Durgalal ji have given Kathak international recognition with his pyro-techniques. Manipuri  has a male-friendly repertoire which has various physically-demanding and acrobatic compositions and almost all the stalwarts of Kathakali have been males. This narrow-minded perception lies in the eye of the beholder - for classical dance is for everybody.

Despite the progress dance has made, the true glory of dance is withering as we become more concerned with external factors such as costume, light and sound. In the scuttle to make everything appear snazzy, the purity and essence of dance is losing ground. The internal expressions i.e. what comes from within is lacking in dancers altogether. It’s almost become a mechanized process. Now more effort is made to ensure that you look better on stage than to work on your dance. The visual is the norm of the day. It is here where classical dance is suffering.

Dance was once a means to connect with God. It was an offering to God in temples; the performers selected for this purpose were lucky to reach out to him. The present day demands more emphasis on all factors which were once secondary. The sacred nature of the performing art has taken a backseat and that’s one of the reasons why many people are not even attracted to it as they once were.

As we continue to battle against social evils, save the earth from environmental disasters and join hands to make this world a better and safer place to live, it’s equally important that we protect Indian classical dance from extinction. The responsibility lies not only in the hands of the gurus but also the parents who need to extend their full support when their kids choose to become classical dancers. We need to awaken our senses to guarantee that we don’t lose this beautiful art which our ancestors have passed on to us. We need to value it and continue its legacy. After all, the show must go on.
Posted by uma dogra at 12:09
Posted by Sayali Goswami at 9:00 AM No comments:

Check Out this Event in Bay Area ,CA

General admission tickets are $10 each.
Sunanda Nair
Sunanda Nair, is a name to reckon with in the field of Indian classical dance. She is an internationally recognized dancer in Mohini Attam, Bharata Natyam and Kathakali and is the disciple of the noted Mohiniattam exponent Padmashree Dr.(Smt)Kanak Rele. She has prepared for her vocation both as a professional dancer and a teacher of dance, through rich and multifaceted experiences in higher academics, stage performances, classroom instruction and choreography.
Sunanda Nair has been a part of many very reputed national and international festivals, and has won high acclaim from critics and connoisseurs of dance for her impressive dancing skills and recently had the privilege of dancing at the world famous Carnegie Hall , New York. She is trained in Bharata Natyam under distinguished gurus, Kalaimamani Kadirvelu, Kalaimamani Mahalingam Pillai, Guru T.V.Sounderajan, Shri Deepak Majumdar, Smt.Tejiswini Rao and lately “The Dhananjayans“, and Guru C.V Chandrashekhar, Chennai. She had her initial training in Kathakali under Kalamandalam Krishnankutty Warrier.
Sunanda, is an empanelled artiste of the Cultural wing of the Govt of India, Indian Council for Cultural Relations and an outstanding artiste of Indian National television.
Sunanda is also the recipient of innumerable awards the "Singar Mani", "Natya Mayuri", "Kalsagar" , "Abhinaya Shiromani" to name a few.
Arun Gopinath : Vocal
Arun started his basic lessons in music from Shri. Sreedharan Namboodiri at a very young age. He continued his education in music from Bhagavathar Shri. Parameswaran Nair for 10 years. Then he attained further education in music from Bhagavathar Shri. Parameswaran Menon for 3 years. Presently he continues his music lessons from Mr. V.R. Dileep Kumar, and has obtained Ganabhushanam in Violin from Chembai Music College. He passed his M.A. in Music with 2nd rank from Kannur University and has performed for more than 500 reputed stages for Classical Concerts and Abhinaya Sangeetha for Bharathanatyam and Mohiniyattam.
Kiran Gopinath : Mridangam
Kiran started his Basic lessons in Mridangam from his Father, Shri.Kalamandalam Gopinathan at the age of 9. Then he started his Academic education in Mridangam from Kerala Kalamandalam and B.A. and M A in Mridangam with (1st Rank) from Chembai Music Collage, and R.L.V. Music Collage,Tripunithura .Apart from Mridangam he is an exponent in other rhythm instruments like, Edakka, Maddalam, Tabla, Ghatom, Ghanjira ,etc. He has performed more than 500 reputed stages for Classical Concerts and accompanying for Classical dance forms.
Mohan Rangan Govindraj : Flute
Mohan Govindaraj is a well known musician who was inspired to learn playing the flute from his father Sri H. D. Govindaraj. At an early age, in 1979, he started his flute career under the tutelage of Vidwan S.A. Sashidhar at Vijaya College of Music, Bangalore. He continued his advanced music education under the guidance of Late Sangeetha Kalarathna Prof. H.V. Krishnamurthy.
Posted by Sayali Goswami at 2:00 PM No comments:

Here is a glimpse of the Ethnic Dance Festival i attended in San Fransisco. This video was taken by my sister as we were watching the impromptu dance session by the participating groups in the foyer. The most exciting thing about the festival for me was the flawless way in which these dance group took the audience around the world, each telling a story about the culture and traditions and history of their country and region. The fact that they had live music along with the dance rather then recorded as i have seen in many festivals, made a huge difference in creating the appropriate ambience for the audience. Also  the encore performance by all the groups together was not only well choreographed but also gave out the message that no matter which country or ethnicity we belong to, music and dance transcends all the barrier and makes all of us world citizens.
Posted by Sayali Goswami at 1:32 PM No comments:

Posted by Sayali Goswami at 2:03 PM No comments:

Loved this modern take on traditional story telling style of Indian dance forms. The story told here is that of Dasavatar or the ten reincarnations of lord Vishnu.

Posted by Sayali Goswami at 1:02 PM No comments: